Intel’s new ATX 3.0 spec create confusion whether the new 12VHPWR connector is required on PSUs with over 450W capacity, or not. In this article I will provide an asnwer to this hot topic, since the 12VHPWR leads to the extra tough transient response tests, including 200% load for 100μs.

I have discussed Intel’s ATX 3.0 spec in a previous article, and if you want even more details, you can read my article at Tom’s Hardware. Both articles will provide you complete insights on the new spec, but they contain a vital piece of information that doesn’t stand, according to recent revelations on this topic. I am always ready to take the blame when something is wrong, and it was because of me, but in this case, the problem is that Intel doesn’t make it clear, and actually, the new spec includes a misconception or a wrong piece of information.

Does the ATX 3.0 spec include PCIe 5.0 compatibility?

Yes and no. A weird reply, I know. So far, according to what the ATX 3.0 spec states, I had the impression that every PSU with more than 450W capacity is also PCIe 5.0 ready since it has to have a 12VHPWR connector. Well, this doesn’t stand as it seems, but let’s take things from the beginning.

About a week ago, I had a discussion with Jon Gerow (Jonnyguru) about whether the new ATX 3.0 PSU should have the new PCIe connector or not. Jon showed me the following table from the ATX spec, and he told me to take a look at the first column,

As you can see, the first column states that PSUs with equal or less than 450W max power AND PSUs without 12VHPWR connectors don’t have to go up to 200% in the transient response tests but only up to 150%. So why Intel also includes PSUs without 12VHPWR without any mention of capacity, so we can safely assume that they have more than 450W max power? Is this an indication that a PSU can be ATX 3.0 spec compatible without having a 12VHPWR connector, even if it has more than 450W capacity?

I won’t deny that this table made me wonder, but I had an ace up to my sleeve, and I replied to Jon with the following title from the ATX 3.0 spec.

Intel clearly states in this title that ANY PSU with more than 450W capacity has to have a 12VHPWR connector! It was time for Jon to be troubled and wonder why Intel in table 3-3 has the title of the first column, including PSUs without 12VHPWR, regardless of capacity. At the same time, the 5.2.2.4.3 paragraph clearly states that any PSU with over 450W capacity has to have the new PCIe connector.

Since we were both confused at that point, Jon reached out to Intel to ask for more information, and it seems he was right! Indeed, a PSU can have more than 450W capacity and DON’T have a 12VHPWR connector! Why is this important, you might wonder? Because these PSUs won’t have to pass the extra tough transient response tests with up to 200% load! The transient response tests for PSUs without the new PCIe connector go up to 150% “only”! This means less hassle for PSU manufacturers since they don’t have to redesign their platforms to offer ATX 3.0 compatibility completely!

According to Jon’s findings, PSUs don’t have to include a 12VHPWR connector to be ATX 3.0 ready and have to pass less stressful tests. On the other hand, it is weird for any manufacturer or brand to release a new PSU with high enough capacity to handle a mid-level at least graphics card and don’t equip it with a PCIe 5.0 connector, which will make it future-proof. Let’s face it, the new GPUs are only a few months away, and most likely, they will utilize 12VHPWR connectors, so by not providing compatibility with them is just crazy! Users will prefer PSUs with PCIe 5.0 connectors to PSUs that don’t have one. This is what every brand should expect! Moreover, PSUs with PCIe 5.0 connectors have more tolerance to power spikes, so most users will feel safer with them! So the fact that the ATX 3.0 spec also allows for stronger than 450W PSUs not to have 12VHPWR connectors doesn’t change the fact that you will need a PCIe 5.0 ready PSU for most of the new GPUs.

Since we are discussing the ATX 3.0 spec, I also thought to offer information about ALPM support, which is essential for any PSU that needs to meet this spec.

In this table, Intel recommends that the T3 timing should be below 150ms for ALPM support. T1 (Power-on time) is usually lower than 100ms for most PSUs, so it is not a real problem, but T3 (Power_OK delay) is tougher to achieve. Intel doesn’t mention in the public ATX 3.0 spec which rail defines the pass criteria on this test. T3 time has to be measured on all rails, but the pass criteria is based only at 3.3V!

Why the 3.3V rail defines the pass or fail of T3 parameter? According to Intel again, this is because the rise time for 3.3V, 5V, and 12V rails has a sequencing requirement that requires the 5V and 12V rails to be within 20ms of the 3.3V rail. 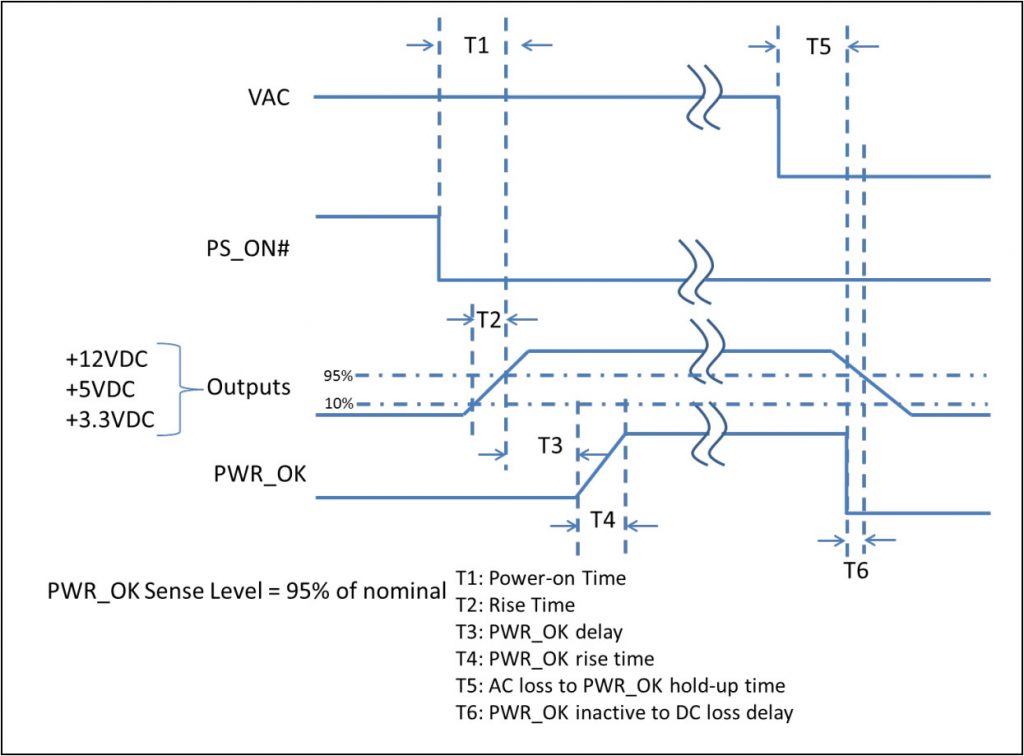 The scheme above shows how you measure T3 time using an oscilloscope. In paragraph 4.2.8, the ATX 3.0 spec states the following:

This means that the 3.3V rail will be the last, in the worst-case scenario, to reach 95% of its nominal voltage, so by having the pass criteria based on it, you allow for more than 150ms T3 time at 12V and 5V.

I made two things clear in this article, which I provide below in a list for your convenience.

Feel free to distribute and use this article, but please provide credits to my work and Jon Gerow (Jonnyguru).