The Upcoming Nvidia GeForce RTX 4090 FE Will Be Compatible With Existing PSUs!

After all this fuss about ATX 3.0 and PCIe 5.0, the upcoming flagship Nvidia RTX 4090 won’t require an ATX 3.0 PSU according to its maker. This is sad news for all these manufacturers and engineers struggling to meet the crazy ATX 3.0 demands, but good news for all users who won’t need to replace their PSUs. Not yet, at least.

As expected, the new NVIDIA RTX 4090 Founders Edition (FE) will have a single 12+4 pin PCIe connector, but it won’t require an ATX 3.0 and PCIe 5.0 ready PSU to operate! NVIDIA stated that existing PSUs will work fine by using the provided adapter cables that it will bundle with its new graphics cards. PCIe 5.0 compatible PSUs are not required for Ada Lovelace GPUs. This was a shock to manufacturers struggling to meet the crazy ATX 3.0 specs for PSUs with 12VHPWR connectors! 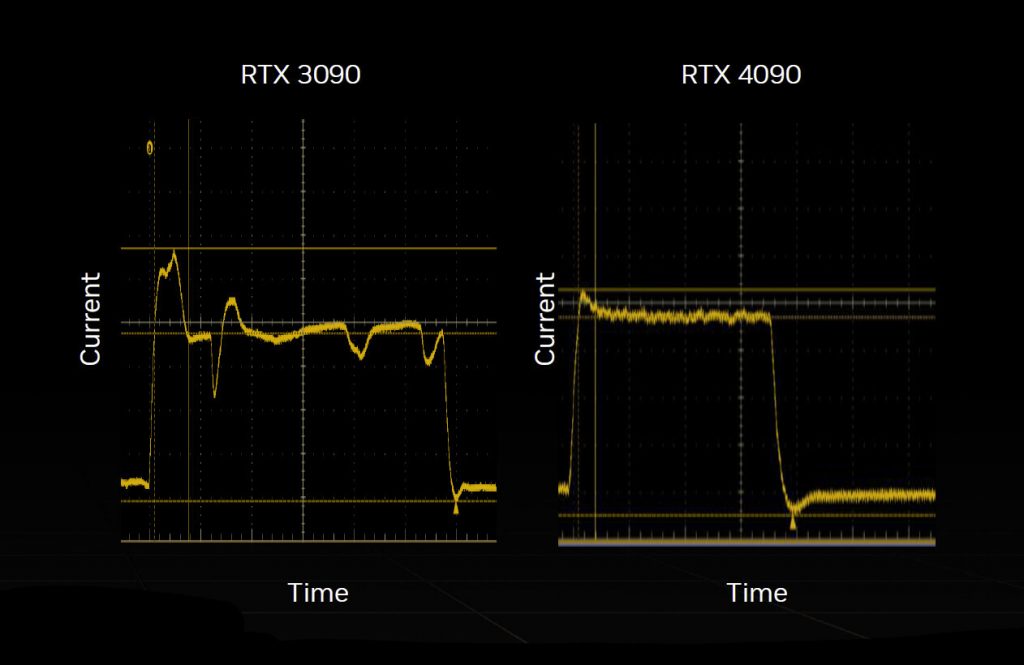 By default, the RTX 4090 needs 450W, but it can go up to 600W to provide more overclocking room. What matters the most is not the maximum sustained power but the power spikes. According to a screenshot that NVIDIA provided, the power spikes on the RTX 3090 Ti are more aggressive compared to RTX 4090. 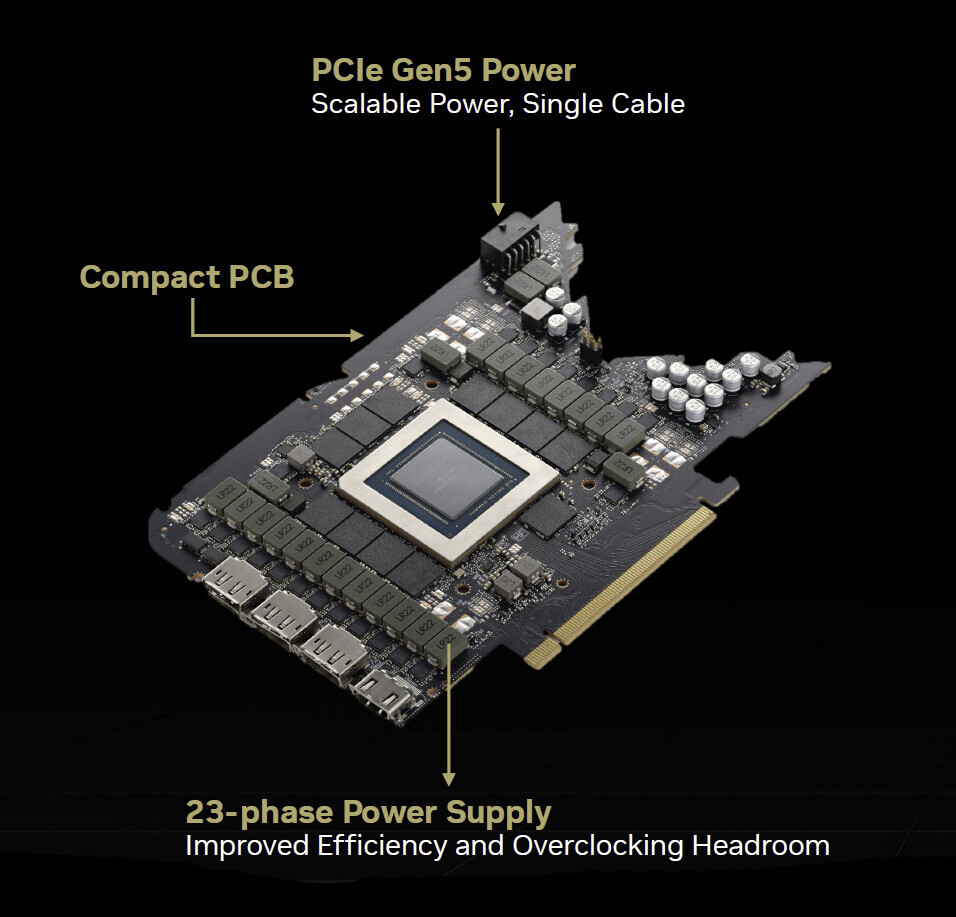 I remember when I first saw Intel’s ATX 3.0 specs. I wondered why Intel didn’t push the GPU manufacturers to use better DC-DC converters on their designs instead of pushing PSU manufacturers to achieve the impossible, allowing 3x the max-power spikes while keeping the PSU’s protection features intact. And now, NVIDIA has come to the rescue by vastly improving the power delivery system on its graphics cards. The 4090 features a 24-phase VRM (20-phases for the GPU and three for the memory), which promises not to stress the PSU and is compatible even with ATX v2.53 units.

Besides the new VRM design, the RTX 4090 will also have an updated cooling system offering 20% more airflow than the RTX 3090 Ti. The heatsink, the fan, and the vapor-chamber plate coming in contact with the GPU and the memory chips are new. The cooling system of the VRMs is also new.

Since there were some problems with increased memory temperatures in the previous line, NVIDIA collaborated with Micron to fix this issue and promises 10°C lower operating temperatures through RAM chips manufactured with a new process. Moreover, the increased density of the new chips, 16Gbit, allows them to be installed on the same side of the PCB, making their cooling easier. 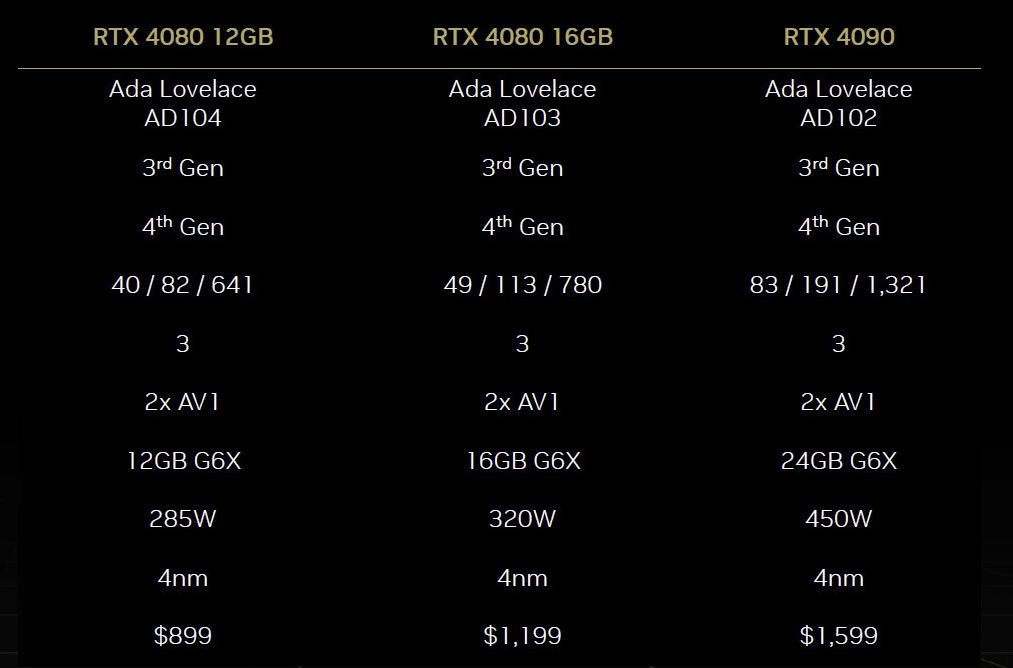 If all go well, the RTX 4090 will be available on the 12th of October with a price tag of $1600. The 4nm AD102 GPU will be supported by 24 GB of GDDR6x Micron RAM, which is connected to the system through a 384-bit wide bus. We shouldn’t expect lower prices till the remaining stock of RTX 3000 cards is sold out.

With the first chance, I will test an RTX 4090 on the Powenetics V2 system to check if NVIDIA’s claims about reduced power spikes are indeed solid. Hopefully, Powenetics V2 will be available for purchase by the time RTX 4090 Ti is out! We had problems finding an appropriate MCU in stock, and we also made some last-minute changes to the PCB design, which pushed back the schedule.