Silent Hill is not a Restless Dream, anymore

It was meant to be just an ordinary article for today. But, I just couldn’t help my self. Finally, after so many years, new Silent Hill games are not just rumours. They actually confirmed and under development. When I wrote my Silent Hill Tribute, just a while ago, I couldn’t even imagine what would follow. I was expecting for a new title, but this was way more than my greatest expectations. Konami really caught me by surprise. A really nice surprise for the entire Survival Horror community.

Yes, Silent Hill town is finally awakened. And is here to stay, as it seems. We are going to wander around the mysterious lake town once again. Well, not only once. Because we don’t have only one game for being happy for, but four. Yes, you read well. Four games are under development. One remake, two new stories and a livestream interactive game. This sounds like sweet Heaven to me. Or should I say Hell? Well, that doesn’t really matter. What really matters is we should be ready for the new welcome. The new Welcome to Silent Hill!

Ok, but what we should expect? Just keep reading, my fellow Horror inmates. 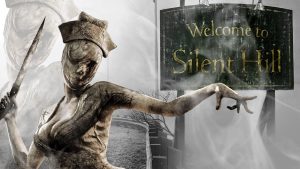 It is confirmed. The remake of the finest part of the series, is almost here. Are you ready to search for your recently deceased wife and join a new adventure? This is your chance.

The Silent Hill 2 remake will be brought to us by the Polish Developer Studio of Bloober Team. But that’s not even the whole story. The remake brought back together two of the most important personalities of the series. The composer Akira Yamaoka and the artist Masahiro Ito. The first one is what I would call the Soul of the games. The latter is the one who shaped the Silent nightmares of the series.

That proves Konami is taking seriously this remake. And for their own good, I hope they do. Otherwise, Pyramid Head might have some extra work to do. According to Bloober Team, they would try to modernize the story a bit, without affecting the core of the original game. I can’t say that this is not sound uncomfortable to me. But I really wish, what they will do, to do it right. Otherwise, this would be too sad for me. Anyway, only the final result would show that. And I hope for the best. The official trailer seems more than promising.

Silent Hill 2 remake will use Unreal Engine and will be available for PS5, for the first 12 months of its release, and through Steam. I am more than excited, I have to admit.

Imagine seeing a frightening girl wandering around your neighbourhood. A girl that even looking at her will bring chills to your bones. Well, that’s the intro of this upcoming project. And I could say that I was amazed. I am really looking forward for the game. Not much is known for the actual story, except that it would be set on 1960’s Japan. This is all we know for now. The developers are NeoBards Entertainment and the story is by RYUKUSHI07. Seems promising.

Another new game of the series, that not much are known about, for now. But this old radio of the trailer still haunts me, days after watching it. So, that means something, I guess. It would be brought to us by the Publishing team of Annapurna and the Developing team of NoCode. Another interesting addition to the dark atmospheric world of Silent Hill.

This might be the greatest bet for the entire Series. What is known until know is, that would be a livestreamed interactive story. A story that the watching audiece could affect, by their interaction and choices. This is something that I am interested of, but I don’t know how should I feel. We shall wait and see. The Developers of this project are Genvid, BadRobot and Behaviour Interactive.

8 long years we were waiting since the never released Silent Hills P.T. for a new game. The Series redefined and evolved the entire Survival Horror Genre. And now, are calling us to join them, once again. Their history is too important and we hope for the best. Also, last but not least, a sequel to the first movie is under development. It will be based on Silent Hill 2, as well. Yes, we know that Silent Hill 2 movie was released back to 2012, but who really wants to remember it? I mean come on. This movie never existed. The name of the upcoming movie will be  Return to Silent Hill.

I am about to leave the small town of Silent Hill, for now, but planning to visit it again. This would depend by the release of the new games. But what do you think about the new games of the series? Are you ready for the new Welcome to Silent Hill? If you would like you can join me in the comment section or our Forum.