Ok, the Title might be a bit misleading, but is partially true. We all know that Chinese Market is a Market where you can find almost anything. I mean litterally. Especially in electronics. But, we should be cautious. Sometimes, things are not so clear.

Chinese vendor, 51RISC, offers a rather strange graphics card. It is advertised as Nvidia RTX 3070 Ti, but that’s not even close to it. Actually, it is a mobile-based 3070 Ti graphics card modded for Desktop use. That makes it more comparable to an RTX 3060 Ti, than its bigger brother. It’s TDP is 220W and offers 6,144 CUDA cores. It offers 8GB VRAM and is powered by one 8-pin connector. It should also be noted that is a dual-fan implementation. Of course, it isn’t what it is advertised to be. 51RISC literally sells a mobile GPU, modified for Desktop use. It named it, as RTX 3070 TiM, and by M seems to mean Mobile. 51RISC’s card requires laptop GPU drivers, in order to work, and heavily depends by their implementation. 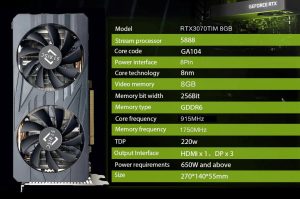 As I already mention, it is closer to a 3060 Ti, but also is cheaper than an official 3070 Ti. Although its price is closer to that, of an official 3060 Ti card. It is not the first time that something like this, is offered by Chinese vendors and usually, products like these, are available only to the Asian Market. Chinese Market includes a vast variety of products that they are exclusive only to them. Usually, the main reason which implementations like these are sold, is their lower price. But it’s not only the price, which is counter, but the offered product, as well. Cheaper yes, same product, no. So, I don’t know if someone should really invest to something like this, in the end of the day. I would prefer to buy an official Nvidia 3060 Ti, rather than an unofficial cutdown mobile 3070 Ti, by a Chinese vendor.

But what is your opinion? Would you buy 51RISC’s RTX 3070 TiM? Do you find it interesting? Do you know other cases, like this?

As always feel free to write your opinion or even your thoughts, about the topic of this article, in the Comment Section. I’d like to know what is your opinion about this rather strange card.