The Philips Momentum 32 329M1RV is designed for Xbox consoles, but this doesn’t mean it is not suitable for PCs. That said, with 4K resolution and 144 Hz refresh rate, thanks to its flat Nano IPS panel, you will need a powerful and super expensive graphics card to utilize it fully.

This monitor doesn’t come cheap; it costs around 1000 dollars or 1000 euros in the EU. Other major specs include Display HDR600 certification, Ambiglow at four sides, and a USB-C port, which, besides graphics data, can also charge your laptop with up to 65W of power. There is also a USB 3.0 hub on the monitor, acting as a KVM switch.

There is no G-Sync support, officially at least, but only Freesync Premium. I enabled G-Sync through my laptop, which has a 3070, and I tried Nvidia’s Gsync demo, which verified that G-Sync was working correctly.

It is two years long, by law, in the EU zone. In the table, you can see the details of the provided warranty regarding dead pixels. My sample was perfect; I didn’t notice any defects.

Who does it refer to?

Obviously, to users with a powerful gaming system, or to users having an Xbox Series X or a PS5 and want to take advantage of the high refresh rates these consoles can achieve (120 Hz/4K). If you are lucky and have a 3080Ti or a 3090, you might get 144 Hz at 4K.

The package offers good protection, and the monitor reached me in pristine condition. The bundle includes only the necessary, an HDMI and a DP cable, the AC power cord, USB Type-C to Type-C and USB Type-A to Type-B cables, a calibration report, and a quick start guide.

The 31.5-inch and 10-bit (actually 8bit + FRC) IPS panel can deliver up to 144 Hz with 4K resolution and high brightness, supporting HDR. The bezels are tiny, and another good point is that the monitor also has speakers!

There are three HDMI 2.1 ports, one DP 1.4, and a Type-C which can handle 4K resolution with up to 120 Hz refresh rate. The same port can also deliver up to 65W of power to charge your laptop. There is also a USB-up port and four USB 3.0 down ports, two of them able to deliver power.  For audio, we have a 3.5mm audio jack.

The base is a heavy piece of metal that looks nice. The monitor’s design, in general, reminds me of industrial products built to last. The LEDs at the back of the Ambiglow system might confuse you at first till you realize what they do. Around the back, the plastic cover doesn’t feel cheap, and all ports are hidden. There is a VESA mount, 100 x 100, to use the monitor without its base and save space.

Regarding ergonomics, height can be adjusted by 130mm, tilt is from -5 to +15 degrees, and swivel from -20 to +20 degrees. There is no pivot and portrait alignment, though. 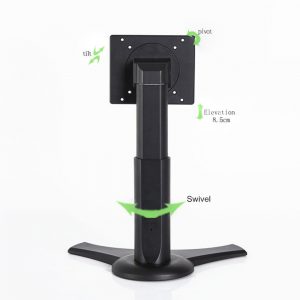 There is a joystick to navigate through the OSD menu, making things easy and the whole process faster. You can quickly access the mode presets by moving the joystick on the left. You get the regular OSD on the right, and on the top, you get the inputs menu.

Overall, the OSD has all the necessary settings and is relatively easy to use. I would like it a bit faster, especially when selecting a new image preset. 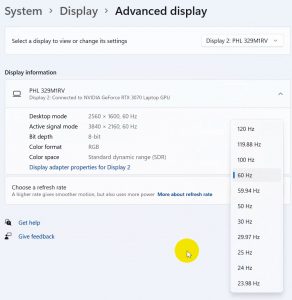 4K with 144 Hz is impressive; the problem is that I could go to 120 Hz max with my set-up. I enabled 144 Hz on all HDMI ports and tried different HDMI cables, besides the bundled one, but Windows 11 still didn’t list 144 Hz as an option but had 120 Hz as the maximum refresh rate. I even tried to set a custom resolution and refresh rate, with 4K and 144 Hz Windows reported that the test was successful, but the reported refresh rate was stuck at 120 Hz once the test was finished.

If you don’t have an instrument to calibrate your monitor, the best presets are the default, Gamer 2, and RTS. The only problem is that out-of-the-box brightness is too low, at only 100 nits at all modes but SRGB, where brightness is stuck at full speed. 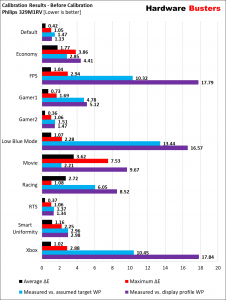 The differences in average and maximum DE are not significant after calibration, but this is not the case for the White Point and the brightness, which I increased to 200 nits. 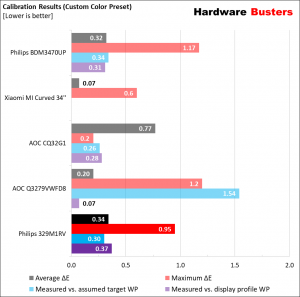 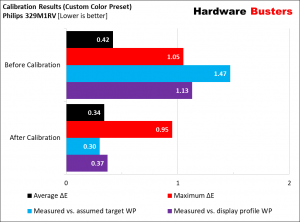 The contrast ratio is low because of the increased black levels. I took dozens of measurements using different settings, but I couldn’t get better readings. I either got a lemon sample or just the panel that doesn’t deliver high contrast ratios. On the other hand, the brightness is impressive, but at a cost (not good black)! Still, such low contrast ratio is a big shame in such an expensive monitor. 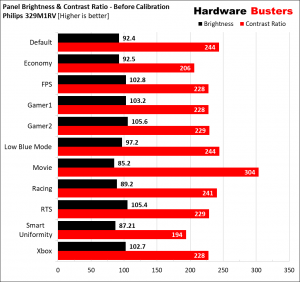 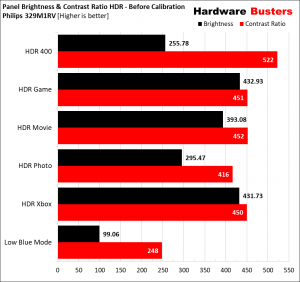 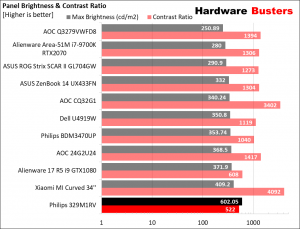 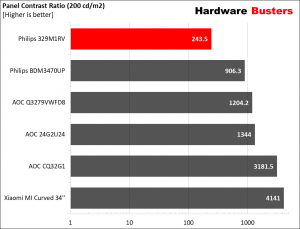 The best modes are default, Gamer 2, and RTS. The color temperature deviations are significant, especially at high values. 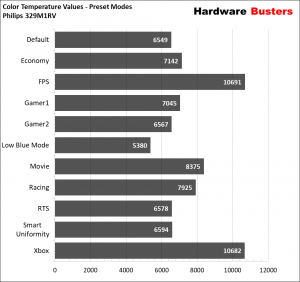 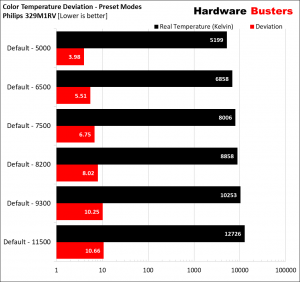 Gamut coverage is decent but not the best I have measured so far. 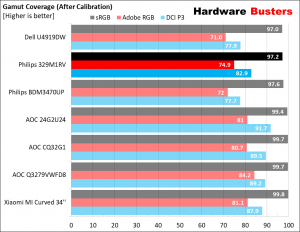 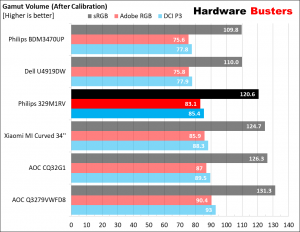 The average Contrast Deviation is high, but the luminance deviation is low. This is something, at least. 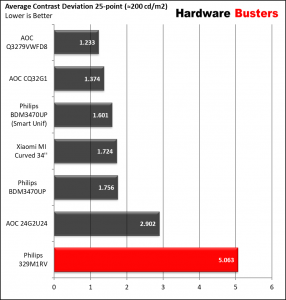 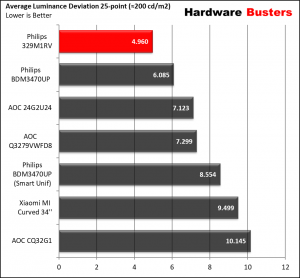 Brightness is not controlled through a PWM signal, which is good because it won’t make you feel tired or even dizzy after several hours of working on this monitor. 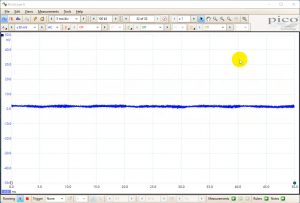 Input lag doesn’t seem to be high, but in future reviews, I plan on using a different instrument that is faster than the one I have. 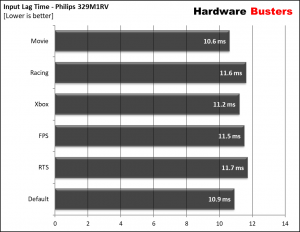 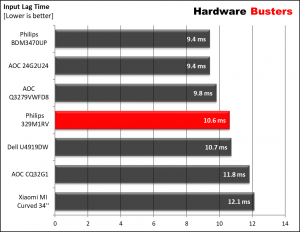 From this review and forward, I will measure the total time required to transition from black to white and vice versa, not 90% of the time. I have also revised the results of the previous monitors that I had reviewed since I kept the raw scope data. As you can see, the panel performs excellently in this area, achieving the best places in response time charts. 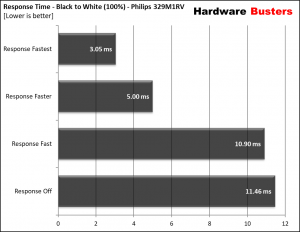 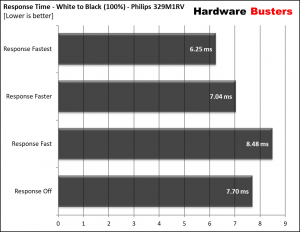 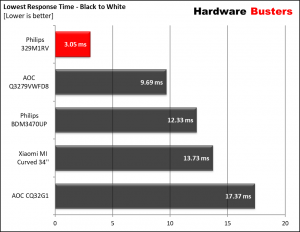 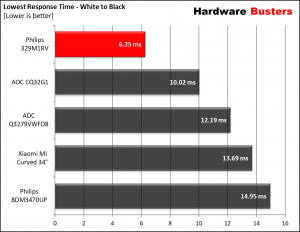 At the fastest response mode, the monitor has a significant overshoot. 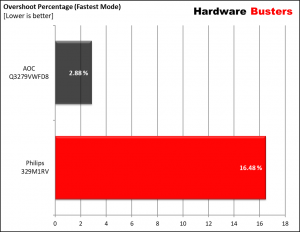 Typical IPS performance, the viewing angles are high with no significant color distortion.

As you can see, the light doesn’t spread all over the screen but is constrained. In a black image, things will look worse, of course. I can say that the panel’s coating performed well in this section.

We have the typical IPS glow in this panel at the edges of the panel. Nothing different than the rest of the competition.

Two speakers with 5W each don’t sound much, but they are decent if you want a break from your headphones. 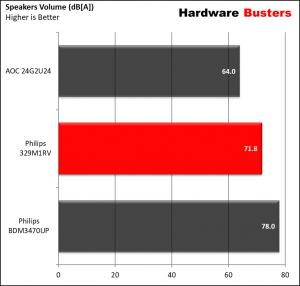 It is high, and I took all measurements without the Ambiglow enabled. Even the 49” Dell behemoth needs less power. Vampire power is low, below 0.5W, at least. 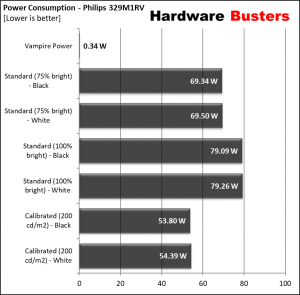 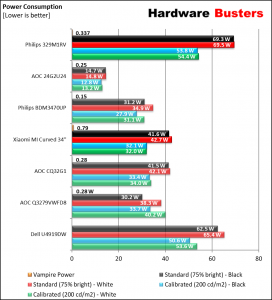 I GOT EXCITED when I heard about this 4K monitor with the 144 HZ refresh rate, which is ideal for Xbox Series X and PS5. Its specs are top-notch indeed, but I encountered several issues in real-life tests. The contrast ratio in my sample is dead low, and I couldn’t increase the refresh rate by more than 120 Hz, whatever I tried. This is a significant con since the most vital point of this monitor is the 144 Hz refresh rate at 4K. For Xbox users, this is not an important issue, though, since they are restricted to 120 Hz in the best-case scenario, with 4K resolution, but for PC users having a strong card, 120 Hz is nothing to write home about. Besides the high price, the major con is the low contrast ratio. 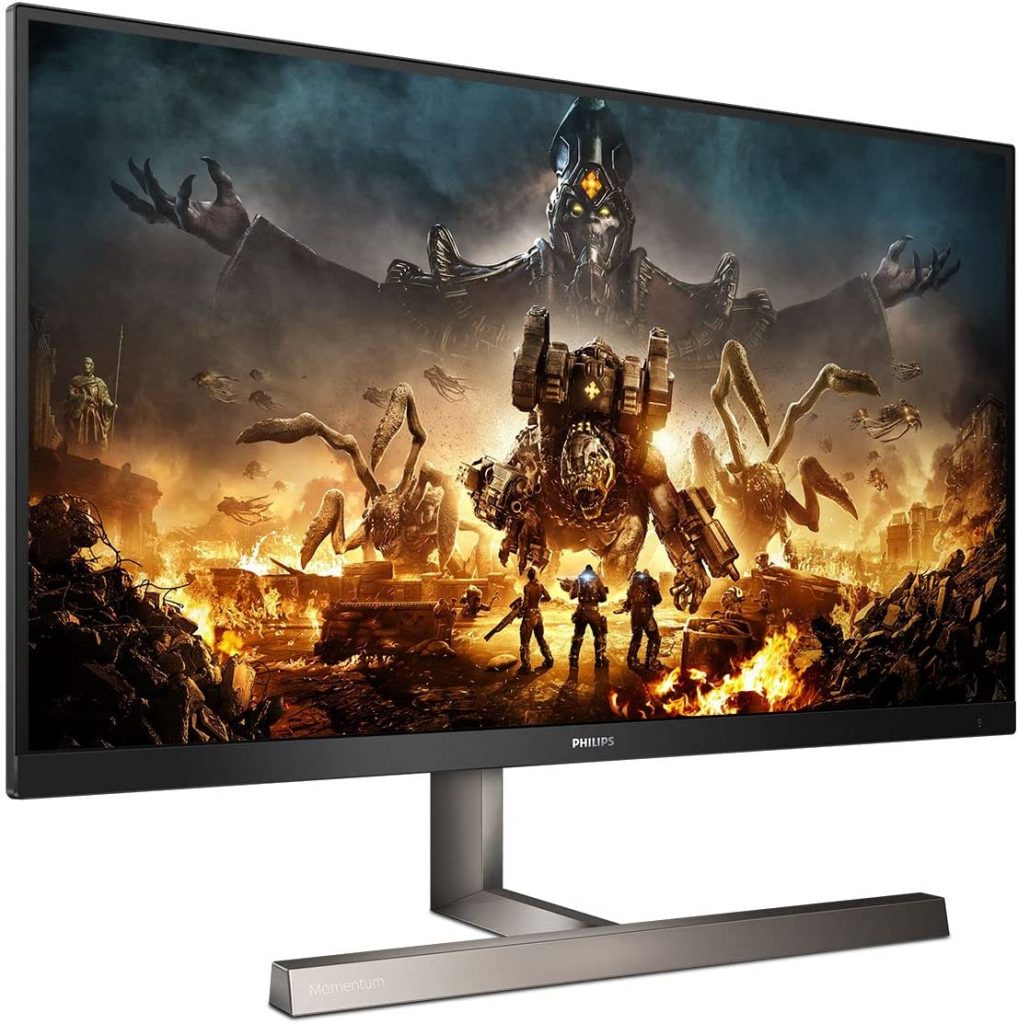 Disclaimer: This review is originally a Hardware Busters International Youtube Video. I only made it an article for the Site. All credits go to crmaris. You can watch the full video here. Don’t forget to subscribe to our Channel and Site, join our Discord Server, and follow us on Social Media. If you would like, you can support us through our Patreon Page to help us offer you more, way more. Your love and support are really important to us.